Deutsche Bank Gets Interactive with Graduates 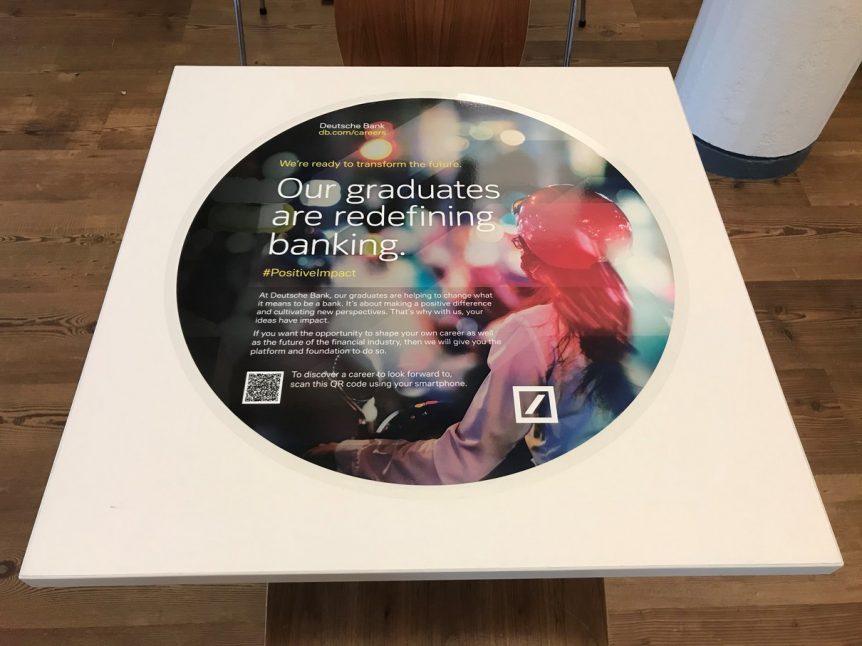 Tabletalk’s unique Tablewrap advertising format dominates the student union space and offers recruiters like Deutsche Bank an innovative way to engage with graduates as they utilise the student union to study, take a break between lectures or relax with friends.

With messages placed at the centre of conversation and with mobile devices in hand, groups of students are seated for significant periods of time allowing Tablewrap to prompt engagement online.

Deutsche Bank has taken full advantage of tablewrap’s unique ability to act as a portal seamlessly connecting the offline and online worlds through the integration of QR technology. Scanning the code automatically directs interested graduates through to Deutsche Bank’s Career Experience, an interactive game that presents different scenarios which give insight into what a career at Deutsche Bank might be like, as well as a sneak peek into the culture and environment.

The creation of a game is a fascinating way to excite and intrigue graduates who might be interested in a career at Deutsche Bank. Particularly clever in its use of technology and video with real world scenarios to entice the cream of the crop to apply. With a choice of English or German for the voiceover, the virtual journey is entirely at the user’s control emulating what they might expect in a typical day and encouraging interaction and independent thinking. The six challenges are insightful and intuitive weaving impressive detail around the organisation’s values and ways of working.

With Deutsche Bank’s graduate campaign centred around recruiting candidates that will be redefining the future of banking by cultivating new perspectives, it’s impressive to see such an intuitive and engaging use of technology. Not to mention Deutsche Bank pushing the boundaries with tablewrap as an advertising format – perfectly in sync with their campaign and its innovative use of technology to recruit the next generation of the global banking workforce ready to transform the future.