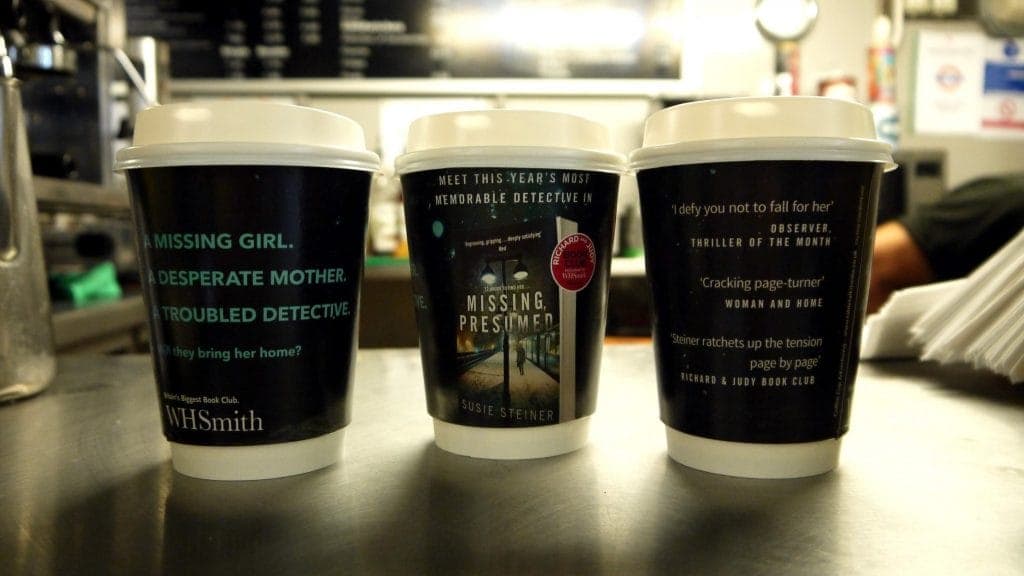 If there’s anything we can be sure of in today’s world, it’s that time is precious and me time is all the more important.  In fact, in the commuter chaos that has ensued in recent months, the cacophony of it all has meant that we have precious little me time to spare.  Commuters have had to box clever and come up with all sorts of survival tactics.  We plug in headphones and drown out the commute with our favourite tunes, or we bury our noses into a book and escape the monotony of our daily routine, even if just for a while.  And for many of us a lack of me time usually means eking out just that extra bit of me time at home which leaves us lacking sleep and in dire need of a caffeine fix the minute we step off the train and begin our mad rush to the office.

So with all that in mind, it makes perfect sense that Harper Collins are supporting Susie Steiner’s latest crime thriller, Missing, Presumed by advertising on branded takeaway Coffee Cups.  To ensure that they reach a commuter audience and complement their Rail activity, all the Coffee Shops taking part in the campaign are located inside stations, on platforms or in close proximity to stations at all the main transport hubs in London.

By the sounds of it, it’s a pretty spectacular story too!  The Guardian’s Alison Flood reviewed Missing, Presumed when the hardback came out in February this year and was impressed by Susie Steiner’s knack at shading in the throwaway details about a character that shift them from two dimensional into three, something that similar storylines often neglect.  Certainly something that fans of books to help bear the brunt of the London commute should snap up!

This is the second campaign for Harper Collins in 2016 having advertised on Coffee Cups to support a Freya North title in April.  We can’t wait to see what’s next.