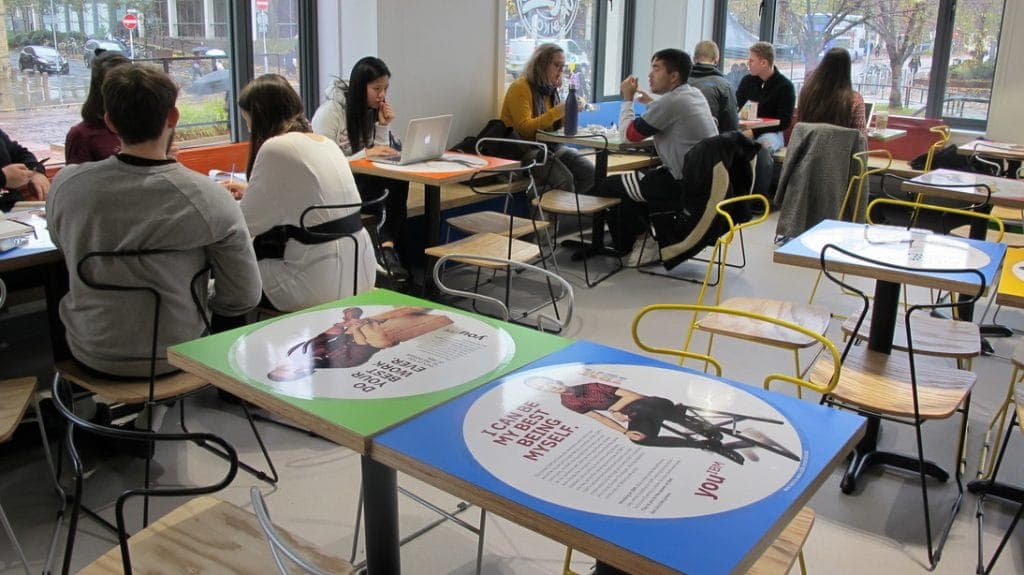 Companies like IBM recognise the immense opportunity in harnessing the power of today’s youth in driving future innovation and inspiration. And they’re hot off the press when it comes to graduate campaigns – fighting for attention in the hopes of securing the cream of the crop.

With so many options to choose from, companies are having to be more and more creative when it comes to pitching themselves as an employer of choice. IBM fully understand the aspiration behind the decision and have launched a fantastic campaign in Edinburgh and Manchester Universities.

Tablewrap advertising in Student Unions promises a captive audience seated for 20 minutes at a time, often in a relaxed, receptive frame of mind with mobile devices or laptops in direct proximity to the message prompting immediate response online. It’s also an excellent way to drive conversation amongst friends and colleagues whilst they’re taking a break between lectures. Students are renowned for their impassioned debates, many of which happen whilst in the student union discussing anything topical. To own the message at the centre of conversation is an extremely valuable space for recruiters, something that IBM has taken full advantage of with their current campaign.

The messages are highly targeted and personalised too with real life storytelling that genuinely grabs attention, with multiple designs that appeal to a broad and diverse audience.

For instance, Ella who joined IBM in 2014 and is welcomed and encouraged for her LGBT+ affiliations. She sits on the company steering committee and acts as a role model working with LGBT+ charities outside of the organisation, as well as being hugely successful at her IBM day job as a Social Content Strategist. There is also Laurentieu who joined IBM in 2015, has written an award-winning book of poems, writes business articles for Forbes, teaches digital marketing in Bucharest, as well as being a Digital Marketing leader at IBM driving fantastic outcomes for the business.