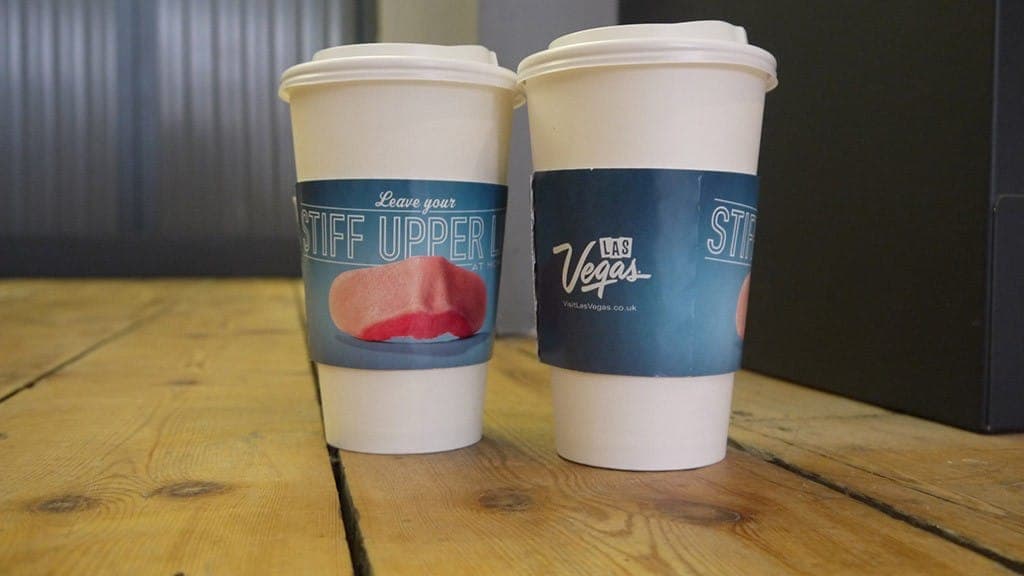 Established in the 1900s, Las Vegas needs no introduction as the Entertainment Capital of the World.  We all know what happens in Vegas, stays in Vegas!  It’s no wonder that tourists flock to this resort mecca, whether it’s the incurably curious to the incredibly carefree, we’re all drawn to the city that never sleeps.  Let’s face it, who doesn’t crave an opportunity to let their hair down and indulge?!

Las Vegas are playing with the UK’s own reputation and encouraging everyone who’s ever dreamed of a trip to this entertainment paradise to ‘Leave Their Stiff Upper Lip at Home’ and choose Las Vegas as their next holiday destination.  The timing of their campaign which runs in June couldn’t be better considering the Wimbledon Tennis Tournament kicks off next week, a sport most notably British and played since the dawn of time with a stiff upper lip!

500,000 Coffee Sleeves will be running in 160 Coffee Shops across the country for 2 weeks with 50 outlets focused in London and 15 dominating Wimbledon in proximity to the tennis.

Oh, and did I forget to mention that Las Vegas has an average 300 sunny days a year?  Compare that to the UK’s 54 and you’ve got me tossing that stiff upper lip, packing my bags and shouting ‘Viva Las Vegas’ in a mad rush to nab a flight over.  After Wimbledon of course!

This campaign was booked by Posterscope and John Ayling & Associates.