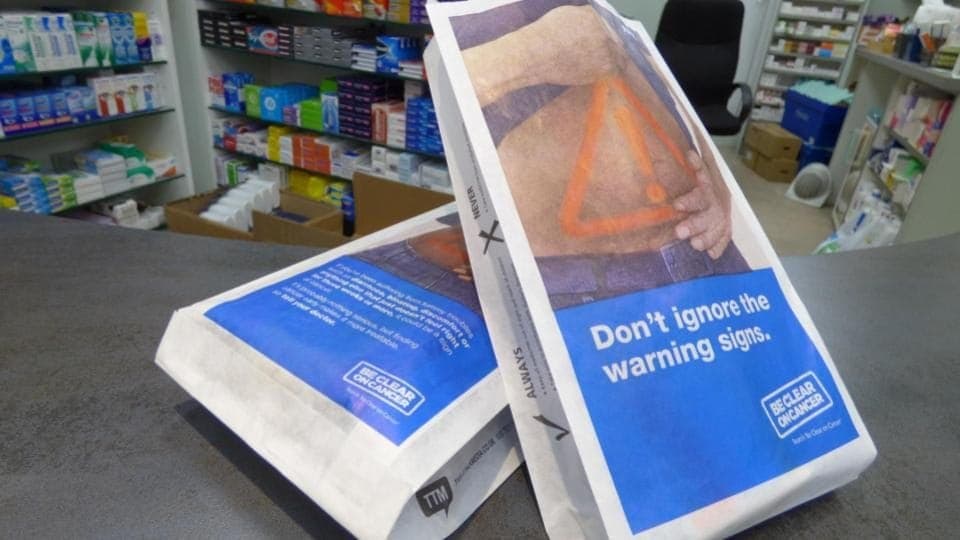 The Be Clear on Cancer brand came about in 2010 through an initiative driven by the Department of Health.  The key motivation was to encourage early diagnosis by raising public awareness of the signs and symptoms associated with cancer.  The program is led by Public Health England in partnership with the Department of Health, NHS England and Cancer Research UK.  Be Clear on Cancer campaigns have been in market since 2011 and while there are many different types of cancer, generally the core demographic for these campaigns is men and women over the age of 50 as the risks for developing cancer tend to increase as we age.  Each campaign is tested locally and regionally before being rolled out nationally if it proves to be effective.

We have worked with PHE regularly since Be Clear on Cancer first evolved in 2011 distributing branded Pharmacy Bags locally, regionally or nationally on numerous occasions each year depending on the particular campaign.  The format is incredibly cost effective.  There is also the added benefit of delivering a serious health message within a pharmacy environment where consumers naturally have health on their minds.  Each branded pharmacy bag is delivered directly into the hands of the public by the pharmacist, known to be one of the most trusted health professionals in the industry.  The message on the bag acts as a prompt for consumers to ask advice of the pharmacist there and then.  Also, 60% of the bags end up at home where medication is often kept in the bag and reused time and again.  This extends the impact of the message into people’s homes where they have the time and the privacy to consider whether their experience of similar symptoms should inspire a visit to their GP.

The latest of PHE’s Be Clear on Cancer campaigns in Pharmacies relates to abdominal symptoms associated with early signs of bowel cancer.  PHE are running the abdominal awareness activity regionally in Pharmacies all over the East and West Midlands.  Advertising health messages like this on Pharmacy Bags is a great way to speak directly to members of the public that might be experiencing symptoms or have early signs of cancer, but it is also an excellent way to reach friends, family and carers who might know of someone in their lives experiencing something similar and be able to offer advice and support to encourage a visit to their GP for an early diagnosis.  After all, cancer is far more treatable today if it’s caught early.