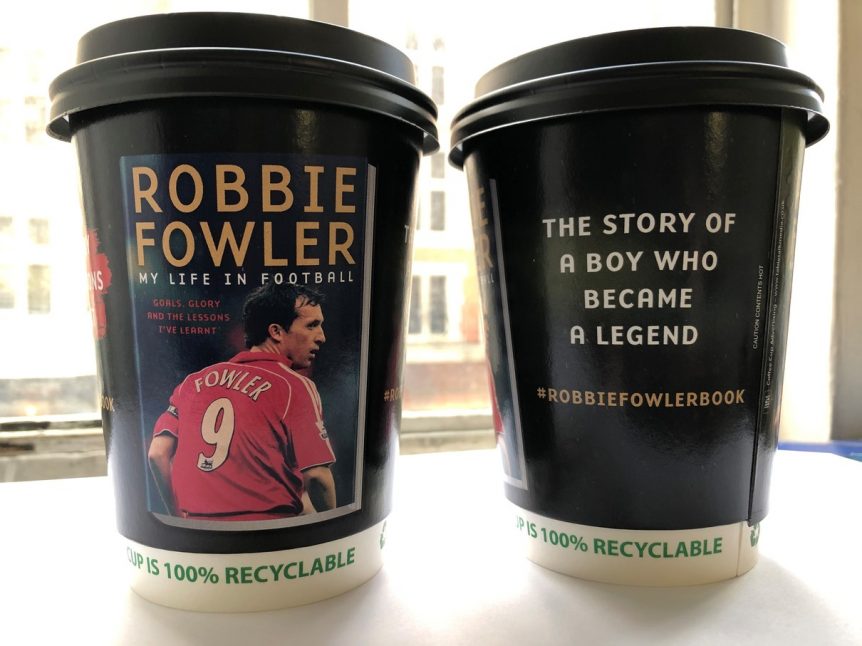 Robbie Fowler is undoubtedly one of Liverpool FC’s most idolised footballers and to fans of the club, he is somewhat of a legend. Reds across the city will be waking up to news that his autobiography is out today (14th November) which will be seen on thousands of takeaway coffee cups in cafes around Anfield.

Bonnier Books wanted to target fans in the shadow of the stadium for LFC’s home fixtures during November and December. Utilising Tabletalk’s national network of independent cafes allowed them to specifically select outlets serving takeaway tea and coffee to throngs of supporters heading to the ground on match days, as well as fans living and working in the area.

Placed directly into the hand with an average dwell time of 21 minutes takeaway coffee cups are a functional format which can’t be ignored and will start conversations with fans helping spread the word in cafes and coffee shops around Anfield.

Robbie remains a popular character and his colourful career on and off the pitch will make fascinating reading for any football fan. The timing of the hardback release means it will also make a great Christmas gift for any Kopities in the family. This is targeting as sharp as the strikers eye for goal was.