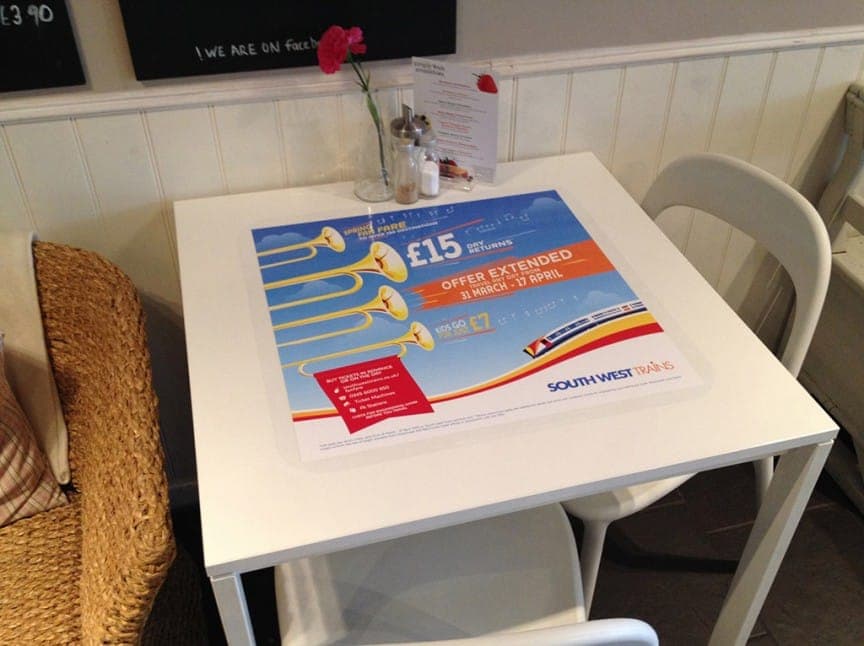 There is something especially satisfying when clients come back, even more so when it’s a regular occurrence.  The latest brand to go mad about Tabletalk is South West Trains.  In October last year, South West Trains ran a Coffee Cup campaign to promote their 2 for 1 travel deals and targeted outlets in places like Bournemouth, Southampton, Poole, Basingstoke etc, all strategically placed along their main route into London.  This is something they followed up with a second burst of activity in February this year.

Coffee Cups aren’t the only format South West Trains is using though.  In November, they decided to put South West Trains front of mind in Student Unions just as students were considering their travel plans for Christmas.  Tablewrap gives brands the benefit of lengthy dwell time and phones naturally on the table, ideal for raising awareness and driving ticket sales.

It’ll come as no surprise that South West Trains have taken their love of table media into Coffee Shops as part of their latest initiative promoting an extended offer on day returns to London.  It’s a great way to reach consumers while they’re relaxing with a coffee wondering where their next adventure will take them – London of course!  Sounds like their travel plans are on track.

The campaign was planned and booked by Rocket and Talon Outdoor.