Uber disrupts Pubs, Cafés and Unis with NFC for launch in new cities 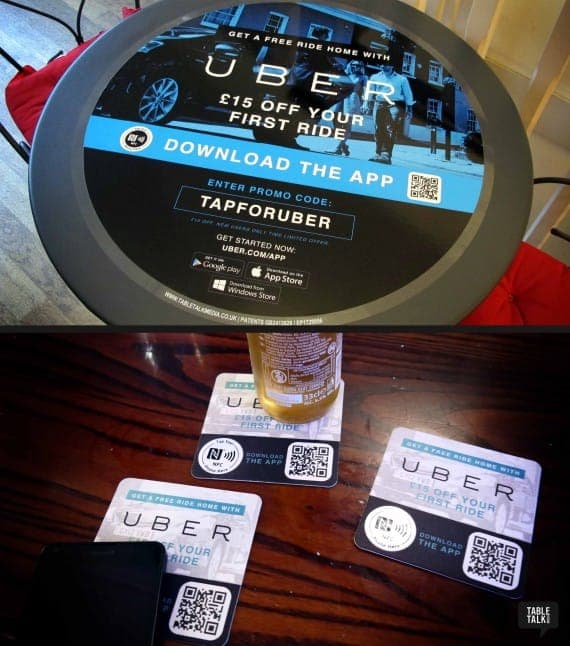 Since Uber’s launch in San Francisco 5 years ago, the disruptive app has capitalised on our need for instant gratification and catapulted the taxi industry into overdrive.  Today the app is available in 58 countries and over 300 cities worldwide.  The debate around legalities has run riot and caused governments the world over a headache, but ultimately Uber is here to stay and worth a hefty $50bn.  Like we Google it, now we Uber it, a clear indication that this is a brand that has had and will continue to have a profound impact on society as we know it.  Part of their strategy has always been rapid expansion.  Having already taken London by storm, Uber are keen to extend their footprint into the rest of the country.

Using NFC enabled Tablewrap in a combination of Coffee Shops and Student Unions, as well as NFC enabled Beer Mats in Pubs, Uber has launched in Manchester, Leeds and Sheffield.  The Beer Mat activity has been extended even further into Birmingham, Newcastle, Bolton, Windsor and Slough, with the whole campaign lasting 4 weeks.

It will come as no surprise that a pioneering mobile brand like Uber has invested in NFC technology giving consumers instant access to their services with the added incentive of £15 off their first ride.  Users can simply tap their phones on the table or beer mat to be taken directly to Uber.  Formats like Tablewrap and Beer Mats are especially well suited to mobile messaging as phones are naturally on the table while consumers are relaxed, receptive and seated for a considerable period of time.

The activity was planned and booked by Tamoco.